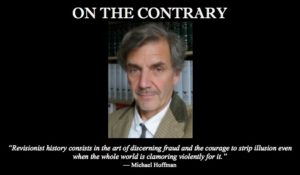 Dr. Michael A. Hoffman II, is a former reporter for the Associated Press and the author of six books of radical history, journalism and literature. He describes himself as a “heretical writer.” Hoffman is also the managing editor of the newsletter Revisionist History.

Here’s an excerpt from Wikipedia about his many books.

Hoffman is the author of these books:

Hoffman has also written the introductions for modern reprints, which he also published, of:

Hoffman has written articles for the UK-based magazine Fortean Times, as well as the Lutheran newspaper Christian News of New Haven, MO, which is published by Otten. He has claimed to have worked as a reporter for the Albany, New York, bureau of the Associated Press. His principal research interests are historical revisionism, the alleged occult roots of Freemasonry, the command ideology of the Cryptocracy, Fortean phenomena, and the sacred texts of Orthodox Judaism.

He also wrote the script for the 1989 publication, Tales of the Holohoax which landed Simon Sheppard in jail.