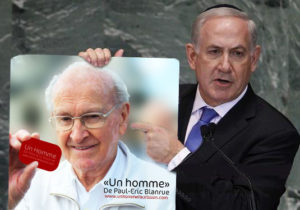 Photo: Robert Faurisson is on the left.

He was born on January 25, 1929, in Shepperton, England. His father was French and his mother was Scottish. For more than half a century he has been Europe’s foremost Holocaust revisionist scholar.

For his views Faurisson has repeatedly been a victim of physical assault. Between November 1978 and May 1993 he was a victim of ten attacks, at least nine of them carried out by Jewish thugs. None of the criminal assailants in any of these assaults has ever been brought to justice. The most savage was a nearly fatal attack on September 16, 1989, for which a group calling itself “The Sons of the Memory of the Jews” claimed responsibility.